Cycling: the Hut’ makes its debut in the world of sport 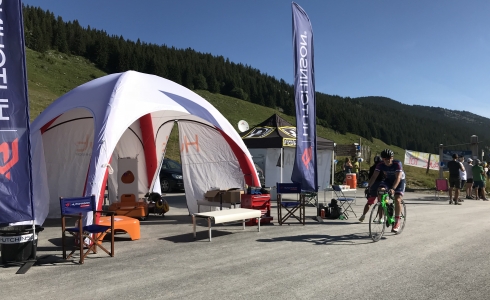 Teams from the Hut’ and Hutchinson Tires came together on 8 July to provide assistance to the 13,000 cyclists in the ‘Etape du Tour’, a high-level amateur challenge that preceded the 10th stage of the Tour de France in the Haute-Savoie region.

The Hut’ - a smart, human-scale emergency shelter - was installed for the first time at a sporting event, on the Glières Plateau, to provide technical assistance to the riders. The Hutchinson team offered various services throughout the day, such as equipment changes and pumping up tyres. The Hut’ helped provide security for the cyclists on an unpaved trail where there was greater risk of getting a flat tyre.

Thanks to the Hut’ smart post, the riders were able to fill up on water and recharge their mobile phones. The most amazing service for some was the electronic speed change system!

The course, which was 169 kilometres long, will serve as stage 10 of the Tour de France on 17 July. In addition, the first Hut’ order will be delivered to the Tour de France for Adecco, during an event called a ‘Fan Park’. Adecco, a Tour de France partner, intends to use the Fan Park event to increase its visibility and reputation with a fun day that will include, notably, activities related to Adecco’s recruiting business. The multi-purpose Hut’ is a mobile, autonomous shelter that has many applications.